S. A. Chakraborty
The World of The Daevabad Trilogy
Whether you're an audio book listener looking for the glossary or a reader wanting to catch up, here you'll find a guide to the world behind The Daevabad Trilogy. (Warning: there are some very small spoilers for The City of Brass in the character list!) 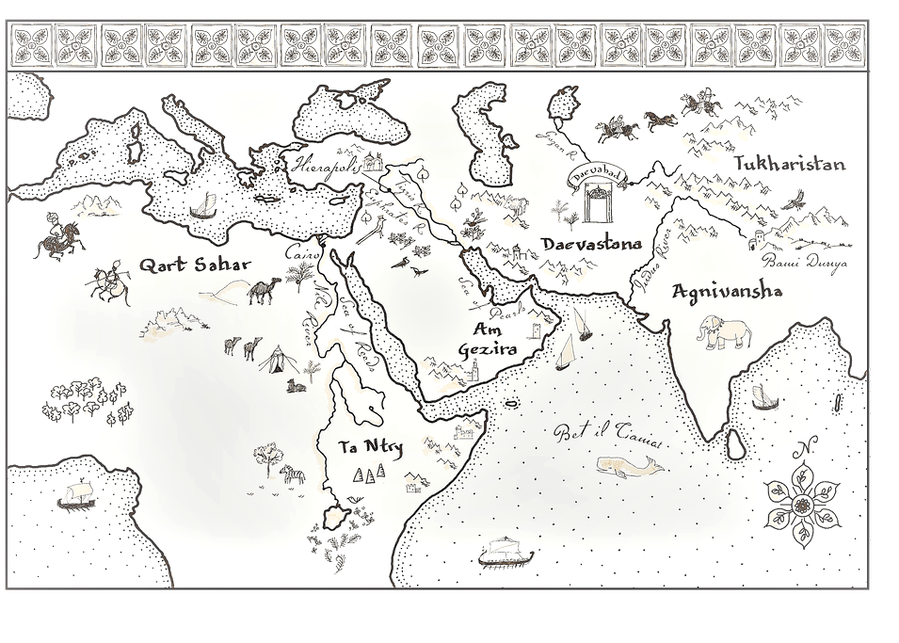 The Six Tribes of the Djinn
"I told you before that Suleiman was a clever man. Before his curse, all daevas were the same. We looked similar, spoke a single language, practiced identical rites. When Suleiman freed us, he scattered us across the world he knew, changing our tongues and appearances."
Daevabad
​"Our ancestors spun a city out of magic—pure Daeva magic—to create a wonder unlike the world had ever seen. We pulled an island out of the depths of a marid-haunted lake and filled it with libraries and pleasure gardens. Winged lions flew over its skies and in its streets, our women and children walked in absolute safety."​

Cast of Characters
THE ROYAL FAMILY
Daevabad is currently ruled by the Qahtani family, descendants of ZAYDI AL QAHTANI, the Geziri warrior who led a rebellion to overthrow the NAHID COUNCIL and establish equality for the shafit centuries ago

GHASSAN AL QAHTANI, King of the magical realm, defender of the faith
MUNTADHIR, Ghassan’s eldest son from his Geziri first wife, the king’s designated successor
HATSET, Ghassan’s Ayaanle second wife and queen, hailing from a powerful family in Ta Ntry
ZAYNAB, Ghassan and Hatset’s daughter, princess of Daevabad
ALIZAYD, the king’s youngest son, given to the Citadel as a child to be trained as Muntadhir's future Qaid

Their Court and Royal Guard
WAJED, Qaid and leader of the djinn army
ABU NUWAS, a Geziri officer
KAVEH E-PRAMUKH, the Daeva Grand Wazir
JAMSHID, his son and close confidant of Emir Muntadhir
ABUL DAWANIK, a trade envoy from Ta Ntry
ABU SAYF, an old soldier and scout in the Royal Guard

AQISA and LUBAYD: warriors and trackers from Bir Nabat, a village in Am Gezira


​THE MOST HIGH AND BLESSED NAHIDS
The original rulers of Daevabad and descendants of Anahid, the Nahids were a family of extraordinary magical healers, hailing from the Daeva tribe.

ANAHID, Suleiman’s chosen and the original founder of Daevabad
RUSTAM, one of the last Nahid healers and a skilled botanist, murdered by the ifrit
MANIZHEH, Rustam’s sister and one of the most powerful Nahid healers in centuries, murdered by the ifrit
NAHRI, her daughter of uncertain parentage, left abandoned as a young child in the human land of Egypt

Their Supporters
DARAYAVAHOUSH, the last descendent of the Afshins, a Daeva military caste family which served at the right hand of the Nahid Council, known as the Scourge of Qui-zi for his violent acts during the war and later revolt against Zaydi al Qahtani
KARTIR, a Daeva high priest
NISREEN, Manizheh and Rustam’s former assistant and Nahri’s mentor
IRTEMIZ, MARDONIYE and BAHRAM, soldiers


THE SHAFIT
People of mixed human and djinn heritage forced to live in Daevabad, their rights sharply curtailed


THE IFRIT
Daevas who refused to submit to Suleiman thousands of years ago and were subsequently cursed, the mortal enemies of the Nahids


THE FREED SLAVES OF THE IFRIT
Reviled and persecuted after Dara’s rampage, only three formerly enslaved djinn remain in Daevabad, freed and resurrected by Nahid healers years ago.

Glossary
​Beings of Fire
DAEVA: The ancient term for all fire elementals before the djinn rebellion, as well as the name of the tribe residing in Daevastana, of which Dara and Nahri are both part. Once shapeshifters who lived for millennia, daevas had their magical abilities sharply curbed by the Prophet Suleiman as a punishment for harming humanity.
DJINN: A human word for “daeva.” After Zaydi al Qahtani’s rebellion, all his followers, and eventually all daevas, began using this term for their race.
IFRIT: The original daevas who defied Suleiman and were stripped of their abilities. Sworn enemies of the Nahid family, the ifrit revenge themselves by enslaving other djinn to cause chaos among humanity.
SIMURGH: Scaled firebirds that the djinn are fond of racing.
ZAHHAK: A large, flying, fire- breathing lizard- like beast.

Beings of Water
MARID: Extremely powerful water elementals. Near mythical to the djinn, the marid haven’t been seen in centuries, though it’s rumored the lake surrounding Daevabad was once theirs.

Beings of Air
PERI: Air elementals. More powerful than the djinn— and far more secretive— the peri keep resolutely to themselves.
RUKH: Enormous predatory firebirds that the peri can use for hunting.
SHEDU: Mythical winged lions, an emblem of the Nahid family.

Beings of Earth
GHOULS: The reanimated, cannibalistic corpses of humans who have made deals with the ifrit.
ISHTAS: A small, scaled creature obsessed with organization and footwear.
KARKADANN: A magical beast similar to an enormous rhinoceros with a horn as long as a man.
NASNAS: a venomous creature resembling a bisected human who prowls the deserts of Am Gezira and whose bite causes flesh to wither away.
​
Languages
DIVASTI: The language of the Daeva tribe.
DJINNISTANI: Daevabad’s common tongue, a merchant creole the djinn and shafit use to speak to those outside their tribe.
GEZIRIYYA: The language of the Geziri tribe, which only members of their tribe can speak and understand.

General Terminology
ABAYA: A loose, floor- length, full- sleeved dress worn by women.
ADHAN: The Islamic call to prayer.
AFSHIN: The name of the Daeva warrior family who once served the Nahid Council. Also used as a title.
AKHI: “my brother."
BAGA NAHID: The proper title for male healers of the Nahid family.
BANU NAHIDA: The proper title for female healers of the Nahid family.
CHADOR: An open cloak made from a semicircular cut of fabric, draped over the head and worn by Daeva women.
DIRHAM/DINAR: A type of currency used in Egypt.
DISHDASHA: A floor- length man’s tunic, popular among the Geziri.
EMIR: The crown prince and designated heir to the Qahtani throne.
FAJR: The dawn hour/dawn prayer.
GALABIYYA: A traditional Egyptian garment, essentially a floor- length tunic.
GHUTRA: a male headdress.
HAMMAM: A bathhouse.
ISHA: The late evening hour/evening prayer.
MAGHRIB: The sunset hour/sunset prayer.
MIDAN: A plaza/city square.
MIHRAB: A wall niche indicating the direction of prayer.
MUHTASIB: A market inspector.
NAVASATEM: a holiday held once a century to celebrate another generation of freedom from Suleiman’s servitude. Originally a Daeva festival, Navasatem is a beloved tradition in Daevabad, attracting djinn from all over the world to take part in weeks of festivals, parades and competitions.
QAID: The head of the Royal Guard, essentially the top military official in the djinn army.
RAKAT: A unit of prayer.
SHAFIT: People with mixed djinn and human blood.
SHAYLA a type of women’s headscarf
SHEIKH: A religious educator/leader.
SULEIMAN’S SEAL: The seal ring Suleiman once used to control the djinn, given to the Nahids and later stolen by the Qahtanis. The bearer of Suleiman’s ring can nullify any magic.
TALWAR: An Agnivanshi sword.
TANZEEM: A grassroots fundamentalist group in Daevabad dedicated to fighting for shafit rights and religious reform.
UKHTI: “my sister."
ULEMA: A legal body of religious scholars.
WAZIR: A government minister. ZAR: A traditional ceremony meant to deal with djinn possession.
ZUHR: The noon hour/noon prayer.
ZULFIQAR: The forked copper blades of the Geziri tribe; when inflamed, their poisonous edges destroy even Nahid flesh, making them among the deadliest weapons in this world.
*Map designed by Virginia Norey